U.S. life insurance application activity ended 2020 up +4.0, the highest annual year over year growth rate on record, according to the year-end MIB Life Index. December 2020 was up 3.7% over December 2019, the highest YOY growth rate for the month of December since 2011. 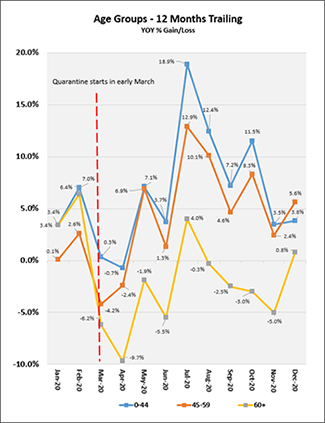 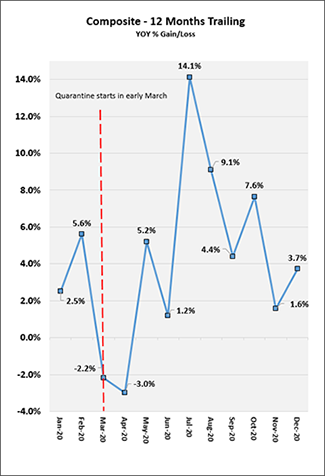 Month-over-month, December 2020 was down -9.5% from November, representing an expected, though somewhat stronger than usual, seasonal decline. Year-over-year, application activity increased in all but 2 months in 2020. The year began strong with February experiencing record YOY growth of +5.6%, but with the onset of the pandemic, activity in March and April declined (-2.2% and -3.0% respectively). Activity returned to growth in May and we went on to have record YOY growth months in July (+14.1%), August (+9.1%), September (+4.4%) and October (+7.6%) and then again in December (+3.7%).

Similarly, information provided to MIB showed overall growth across all product types. However, younger applicants up to age 30 appear to lean toward indexed or interest sensitive products whereas their older counterparts ages 61+ appear to be more concerned about guaranteed value. This is reflected in a double digit (11.2%) increase in Universal Life aplications for ages 0-44 and increases in Traditional Whole Life for ages 61+ (7-8%) as well as a decrease in term applications for ages 61+ (in double digits for those 71+). 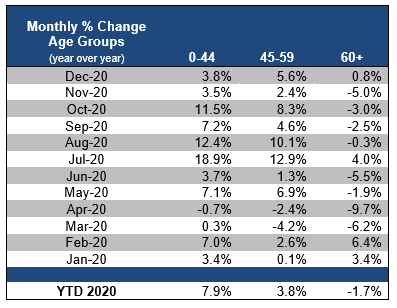